Cynthia is careful to stay grounded in solid, empirical research, but you’ll love the way she translates theory into common-sense practice.  Here’s a look at how her graduate research made an immediate difference in the lives of her students:

I often tell people that during my graduate degree I rented a place on the “intellectual cul de sac” where few people live and even fewer people visit.  I had the incredible privilege to study with several primary and secondary researchers in the field of cognitive styles, and I had access to some of the strongest and most reliable research available.  From the beginning it was my goal to take this solid, empirical research from the cul de sac and “translate” it for folks on the streets where the rest of us live.  (Later I would call my business Apple St.—that stands for Applied Learning Styles being used on the street where you live.)

I knew I’d been called to reach those educators, parents, and others who were in the trenches—the ones who fervently wanted to make a difference for their students and children but didn’t have time to wade through the research.  I worked hard to make sure I could be someone they could trust to be grounded in proven theories while giving them practical and immediately useful strategies.

As I studied the research, I tried it out on my own students in the classroom.  I couldn’t personalize the learning for every student, since I had 180 of them every semester, so I told them what I was learning and pointed out how I was changing the way I teach.  I showed them how they could figure out their own learning strengths and helped them look for ways to adjust to situations that didn’t match the way they learned. 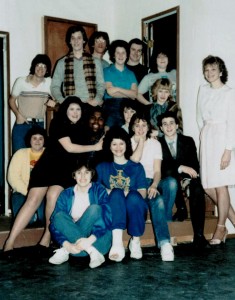 The results were amazing and immediate.  It would take a whole book just to tell part of the story of students whose lives were changed, and even 30 years later I have over 20 students who have connected with me on Facebook to tell me what an impact learning styles had on them.  It wasn’t me—I was just the messenger of something much bigger than any of us.

Many students said that for the first time they felt smart and valuable as they began to have confidence in their ability to learn and achieve.  I wasn’t teaching at a private school or even a public school in a rich exclusive neighborhood.  We were in a lower to middle class public school and I was teaching kids who had often been relegated to average or below average classes because of a perceived lack of motivation or ability.

But suddenly these “below average” students began to see A’s and B’s on their tests and assignments, and the rest of the world began notice what I’d seen in them from the very beginning: they were bright, creative, intuitive learners full of exciting potential.

As part of my graduate requirements, I participated in an internship through SPU, teaching learning styles seminars to teachers and parents.  As a result of these seminars and along with  further study, one of the specialties I developed was understanding and dealing with the Strong-Willed Child.

During the last two years of graduate studies, I quit my teaching job and took a position as a paralegal for an immigration and naturalization attorney in downtown Seattle.

Working 6 a.m. to 2 p.m. gave me time to attend classes on campus and then give evening presentations on learning styles and strong-willed children.

On January 1, 1987, I opened my own business, soon to be called Apple St. LLC.  It would be a financial challenge and a struggle to survive for the first few years, but I believed it also represented a big step to the next level in making a difference in education. I was loving what I was doing, even if I wasn’t making any money teaching the extra seminars, and in 1986 I received my M.Ed.   I also became engaged to be married in September of 1987 and resigned my position as a reserve police officer and program director.

Story to be continued on My Purpose